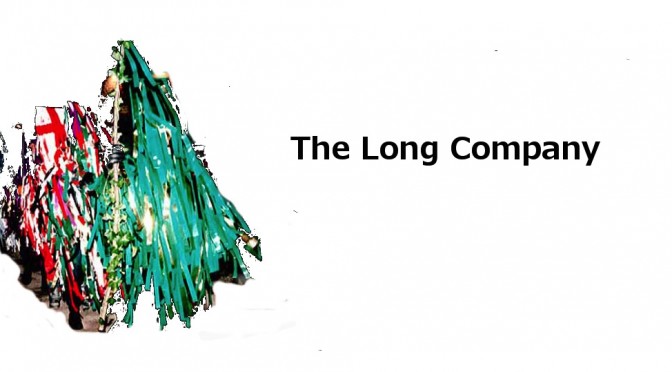 Performances were followed by a more sober music and song session than usual, but enjoyable nonetheless.

The Long Company Mummers are a long-established team of players who delight audiences with their traditional play on only four nights in early January every year, ending on Twelfth Night (6 January). They’ve gone away now, until January next year.

What is the Long Company Mummers’ Play?

The play itself is an amalgam of traditional texts which have been selected by each player to be the best representation of their character.
The characters are King Christmas, St George, The Prince of  Paradine, Common Jack, The Doctor and Beelzebub.
Supported by a band of musicians, the players arrive from the dark, deliver their seasonal play by lantern light, and disappear back into the night.

Each performance is followed by a music session in the pub, featuring songs, tunes and seasonal novelties performed by the assembled company.

Have a look at some samples of previous years’ performances HERE  on the VIDEO page.

At each venue, after the performance, the Long Company Mummers asked for donations from the audience.
The collections are given 100% to 4 local charities:
Music for the Many – Todmorden;
Overgate Hospice – Elland;
Happy Days – Sowerby Bridge;
St. Bartholomew’s Church – Ripponden. 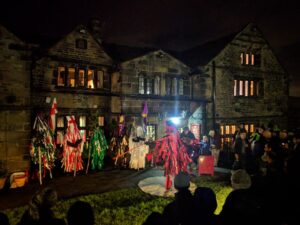 Ryburn 3 Step would like to thank the Golden Lion in Todmorden, the Fleece in Elland, the Hogs Head in Sowerby Bridge, and the Old Bridge Inn in Ripponden for hosting each performance.

Thanks to all who supported and helped the Long Company Mummers in 2020. HAPPY NEW YEAR!

The magical Long Company Mummers have finished their 2019 season of 4 lantern-lit traditional street plays with a fabulous performance followed by music, song, and dance at the wonderful Old Bridge Inn, Ripponden.

Ryburn 3 Step is delighted that, thanks to the generosity of the audiences who supported the Long Company Mummers in 2019, the collection raised £90 to support each of our four chosen charities: Incredible Edible, Happy Days,  Overgate Hospice, and St Bartholomew’s Church. Thank you all, and HAPPY NEW YEAR!

The Long Company Mummers completed their 4 performances of 2018, welcoming in the New Year at the Golden Lion in Todmorden, the Hogs Head in Sowerby Bridge, The Alma in Cottonstones, and the Old bridge Inn in Ripponden. Despite the heavy rain for the first two performances, and the freezing temperatures for the other two, many people turned out at each venue to watch. The play started each night at 8pm prompt, and was followed by seasonal music, songs, and jollity in the pubs afterwards which brought enjoyment to all. Once again the Long Company thanks the staff for welcoming us to their pubs for these traditional English seasonal performances. Many thanks to all who came to see the 2018 New Year in with Long Company. Cheering, booing, heckling, singing, dancing, playing – however you took part – thank you.
Now we’ll see what the rest of the year will bring.
HAPPY NEW YEAR!

What better way to welcome in the New Year than with the Long Company Mummers?

The Long Company Mummers have completed their 4 appearances in 2017 with a performance at the picturesque Olde Bridge Inn in Ripponden on 12th night, watched by over 200 people. The performance finished with a spectacular firework display as the Mummers disappeared into the night, not to be seen again until January 2018.  Afterwards the song and music session in the bottom bar was heaving with singers, musicians, and dancers, some of whom had travelled from places far away from the Calder Valley – Sheffield, Lincolnshire, and even Lancashire!

The Mummers’ first 3 performances were at the Navigation Inn in Sowerby Bridge, the Hinchliffe Arms in Cragg Vale, and the Alma Inn in Cottonstones. All were lively gatherings, with songs and tunes inside the pubs afterwards. We thank all the staff for welcoming us to their pubs for these traditional English seasonal performances.

The Long Company  performed their Mummers play at the Alma Inn, the Navigation Inn, the Hinchliffe Arms, and the Old Bridge Inn to the delight of assembled onlookers. We are delighted to announce that, thanks to the generosity of the audiences, the collection of £300 has been donated to Calderdale Flood Relief. An Independent Folk Development Project in the Ryburn Valley