The Bard of Bolton 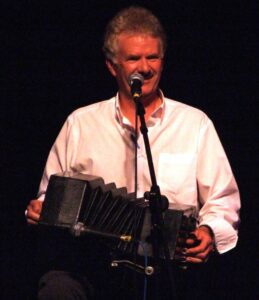 Bernard Wrigley – the Bolton Bullfrog –  is the master of the bass concertina (the largest concertina you’ll ever see in the Ryburn Valley) and a wonderful guitarist. Come along for a wonderful evening of old songs, Lancashire humour, and reminiscences.

Bernard is an actor as well as a singer, musician, and storyteller.  He has appeared in Brassed Off, My Son The Fanatic, Coogan’s Run, Coronation Street, Emmerdale, Dinner Ladies, and Peter Kay’s Phoenix Nights, can be heard on Mark Radcliffe’s programmes on BBC Radio, and  in radio plays and serials as well. He has recorded 18 LP’s and CD’s,  and authored 3 books of daft one verse poems – Shorts For All Occasions released in 2006 and The Longs & The Shorts Of It released in 2008. The third book is Shorts Forever and was released in 2015.

As well as performing at concerts and folk clubs, he loves the varied nature of it all, such as one week reading a series of very silly customs on the Mark & Lard show on BBC Radio One, then being a prisoner in a TV advert for Walls’ Sausages, being murdered on TV in Harbour Lights and later going to Norway for a commercial. Read all about it on his website HERE

Bernard has been delighting audiences for over 50 years and we are very pleased that he’s managed to find time to come over to Yorkshire to see if he can delight the Ryburn Folk Club audience with his songs and monologues. He is a very popular entertainer so don’t miss this opportunity to come and see him.