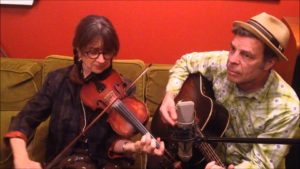 One of the most respected players in old time music today, Beverly Smith is a singer, song writer, fiddler and dance caller, as well as a banjo, mandolin and guitar player. Besides her highly praised recordings of early country duets with Carl Jones, Alice Gerrard and John Grimm, her guitar playing has been featured on recordings of fiddlers Bruce Molsky, Rafe Stefanini, Tara Nevins and Matt Brown, and her singing with Mick Moloney, John Doyle, Laurie Lewis and others.

Along with June Drucker, Rose Sinclair and Tara Nevins, she was a founding member of The Heartbeats Rhythm Quartet. She played for many years with Bruce Molsky and Rafe Stefanini as Big Hoedown, and with Rafe, John Herrmann and Meredith McIntosh as The Rockinghams.

She has been a featured guest on A Prairie Home Companion, ETown, Mountain Stage and Voice of America, has toured extensively in both the USA and the UK, and has played concert halls and festivals all over Europe, Canada and the USA.

We are delighted that Beverly has found time to stop with us during her UK tour, and play in our “American season” this autumn. Don’t miss this opportunity to hear her  perform in one of the intimate house concerts that Ryburn 3 Step organises at 103 Oldham Road, Ripponden.

The Concert will run from 8 pm to 9 pm, then it will be followed by an open session of songs and tunes
Bring your own refreshments.
No entry charge – Donations welcomed.

Our House Concerts are very popular, so reservations are recommended – phone Sue Coe on 01422 822569, Email sue@petecoe.co.uk