American song traditions from the Warner Collection with banjo, concertina, and guitar. 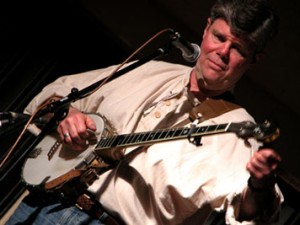 Welcome back Jeff Warner, with songs from his family collection. Frank and Ann Warner were major folk song collectors along eastern USA, finding, amongst many other singers, Frank Proffitt who sang them “Tom Dooley.” Jeff is a consummate singer, musician, and performer, and featured at several festivals over this summer.

Jeff grew up listening to the songs and stories of his father and the traditional singers both his parents met during their folksong collecting trips through rural America. He accompanied his parents on their later field trips and is the editor of his mother’s book, Traditional American Folk Songs: From the Anne and Frank Warner Collection. He is producer of the two-CD set, Her Bright Smile Haunts Me Still, the Warners’ recordings of rural singers, many of them born in Victorian times. “The scion of one of the nation’s most eminent families of folksong collectors, he represents a tradition that is fundamentally unbroken since pre-industrial times” (Stuart Frank, Senior Curator, New Bedford Whaling Museum).