Old Time songs and tunes from North Carolina and beyond with banjo and fiddle. 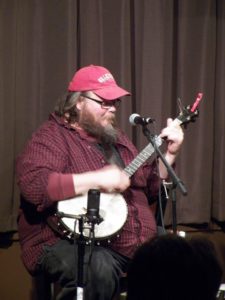 R3S welcomes the return of RILEY BAUGUS (“Cold Mountain” film adviser and banjo maker, Willie Nelson Band), playing banjo, fiddle & guitar. Riley is better known locally playing for the show “Appalachian Roots” with dancer Ira Bernstein with many concerts at The Square Chapel in Halifax. He is the real deal: as a teenager he visited and learned first-hand from the older traditional musicians like Tommy Jarrell. He’s playing our Folk Club as the first night of his tour which also includes dates in Ireland.

Riley Baugus began singing and playing music at an early age. Raised in a household where recordings of old-time music were often played, he developed a love and appreciation for traditional southern Appalachian music. He and his family attended a Regular Baptist church, where unaccompanied hymn singing was a long-standing tradition.

Riley is well-known to Ryburn 3 Step through his association with Ira Bernstein who taught Appalachian step dancing to many of us to the wonderful fiddle and banjo playing of Riley. As a student of such luminaries as Doc Watson and Tommy Jarrell, Riley is the real deal and fans of authentic Old Time music should treasure this opportunity to hear him sing and play live.