“The Road to Peterloo” at Huddersfield University

Ryburn 3 Step presents “The Road to Peterloo” at Huddersfield University Ryburn 3 Step presents “The Road to Peterloo”  at Huddersfield University:

Ryburn Folk Club organiser, Pete Coe, along with Brian Peters & Laura Smyth, bring their concert to Calderdale having had sell-out performances at concerts & major folk festivals over the summer. In this bi-centenary year three strong singers & accomplished multi-instrumentalists tell the story of the Peterloo Massacre in Manchester on 16th August 1819. They present ballads written by the witnesses & published in the radical press & on broadsides sold on the streets soon after the event.

On that day, it’s estimated that over 60,000 people from Manchester & surrounding towns & villages gathered on St Peter’s Field to listen to Henry ‘Orator ‘Hunt campaigning for universal male suffrage & parliamentary reform. At that time Manchester had no MPs. It was a legal & peaceful demonstration families wearing their Sunday best. What followed is documented in Mike Leigh’s film ‘Peterloo’, released last year, when the magistrates, in a panic, gave orders to The Manchester Yeomanry to arrest Hunt & disperse the crowd. They were a drunken ill-disciplined, part-time cavalry who attacked with sabres killing 18 & wounding at least 600, including many women who were specifically targeted. 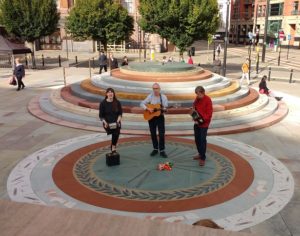 It has taken Manchester 200 years to provide a substantial memorial, designed by Jeremy Deller, to be located on the site. Engraved on the memorial are the names of the victims & above are the towns where the wounded & others came from, Stockport, Oldham, Rochdale etc. as you’d expect, but one place name is unexpected… RIPPONDEN. Records state that William Slater, from Ripponden, had his ‘shoulder much bruised by the constables.’ It seems he had a lucky escape. So, who was William Slater & can we find out more about him, does he have descendants still living in the area?

Find out more about ‘The Road To Peterloo’, the concerts, the CD & reviews on https://www.theroadtopeterloo.com

Production in association with Ryburn 3 Step.