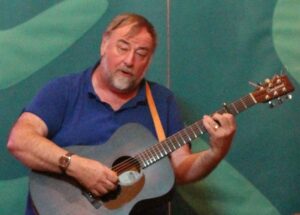 We are delighted that Nick Dow will be the guest at our next ‘Virtual House Concert’ on Wednesday evening 29 July.

Nick has just published a book ‘Southern Songster’, of English Folk songs from the Hammond & Gardiner manuscripts, which is available to order HERE, price £15.

It is over fifty years since Frank Purslow edited Marrow Bones, the influential book of folk songs collected by Robert and Henry Hammond and George Gardiner in Hampshire and Dorset between 1905 and 1908. Purslow went on to produce The Wanton Seed, The Constant Lovers and The Foggy Dew (the last two reprinted in 2017 by Francis Boutle Publishers as Southern Harvest) – 350 songs in all out of a total of 2,400. Southern Songster makes available a further 100 songs and ballads that have not seen the light of day for over a century. There are some unique tunes and texts, as well as interesting versions of songs already visited by Purslow.

The musical notation has been supplied by Cohen Braithwaite-Kilcoyne, and the song notes have been supplied by Steve Gardham who has added considerably to our knowledge of these important nineteenth-century collections, while Tim Radford introduces ten chanties.

One of the best Folk voices of his generation, Nick Dow has been singing and collecting Traditional Folk Songs for over forty years. His gigs are informative and entertaining, his guitar playing is sensitive and well thought out, and his repertoire contains many songs you will hear nowhere else. Nick has gleaned songs from the West Country, and been given songs by the Travelling people with whom he has lived and worked. Watch Nick singing “Ye Lovers All” at the Fleetwood Folk and Blues Festival.

Nick has also recently released a CD “In a Garden Grove” – Love songs from the British Tradition. Read a review of the CD  HERE .

REVIEWS:
The adjective “sturdy” is the overriding impression that first acquaintance with Nick’s singing affords; his is a well-rounded and full-toned baritone with a warm, supremely even-toned range and a grand confidence in the direct, unfussy delivery – David Kidman.
He’s really a rather good and interesting singer – Rod Stradling.
The quality of his singing left me reeling. He has a warm, mellow, lived-in voice that invites comparison with Cyril Tawney and Dave Burland – Tony Hendry.
Nick’s a great singer with a fabulous voice and excellent style –  Gavin Atkin

Using the online meeting app Zoom, you will be able to see, listen to, and talk to Nick from the comfort of your own home as he sings, plays, and talks us through his new book and CD. The Session will open at 8.00pm for some songs from the Ryburn Folk Club residents, then Nick will join us  from 8.30 to 9.30.

To book a place please email ryburn3step@gmail.com
If you want some help with using or setting up Zoom please just email and ask. We look forward to hearing from you.

There is no entry charge to R3S virtual Sessions. Performers like Nick have currently lost their income from live appearances, so we ask you to consider making a supporting purchase.